The Quest for Classics

By Jens Stenström - January 19, 2019
I started playing modern designer board games back in the early days of the new millennium. Back then far fewer games were published annually, and the gap between a few quality games and a lot of really bad "games" was huge. Some speak of this era as a time when no good games were published, or if they were they are obsolete by now. To those people I would like to raise a gracious but steady middle finger. 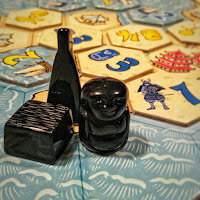 It is true that a lot of bad games were published. It is also true that some of those games haven't stood the test of time. But the foundation for the board games published today was laid back then, and there are still games from the late 90's and early 00's that are unrivalled today. Amongst others designers like Reiner Knizia and Wolfgang Kramer (often with Michael Kiesling) were producing awesome games.

Back in the day you really didn't know which games were to be awesome. Sure we had BoardGameGeek but the userbase was quite small, so there were a lot of games being published that I remember looking at and wanting, but then never got, only to regret it when they went out-of-print. Also at this time my brother was living close by and if he happened to grab a great game, I felt it was redundant for me to also get it. But then he moved away to another town. So in this day and age of cult-of-the-new (which by the way was thing already in the early 00's), The New Hotness, and Kickstarter, we decided we wanted to hunt down the old classics.

We started off by getting Friedemann Friese's Power Grid. I hunted down a copy (still in shrink wrap, mind you!) of one of my favourite games ever; Wolfgang Kramer's Pueblo. I found second hand copies of three Ystari Games Originals (I've always loved Ystari's games and Ys as well as Mykerinos are priceless gems in our collection) in great condition; Yspahan, Metropolys, and Olympos. I found an almost mint condition second hand copy of Reiner Knizia's Samurai - and not the horrible overpriced Fantasy Flight reprint but Lautapelit.fi's Nordic version of Hans im Glück's original printing.

There are still a lot of classics that I am trying to hunt down, but it is such a rewarding journey to delve into the nostalgia, digging for copies of games I love but never got, or games I craved but never got to play. These are the games I'm looking forward to teaching to my son one day. Games that I probably will be playing with my wife at the retirement home. These are the Classics.
board games classics metropolys mykerinos olympos power grid pueblo reiner knizia samurai wolfgang kramer ys yspahan ystari

Popular posts from this blog

By Jens Stenström - January 17, 2019
I am not usually one to get hyped about upcoming games. I like for the game to be released and then to read some reviews and see some playthroughs before I make up my mind. I've been in the hobby for far too long to get overly excited for something that I'm not playing. You can call me jaded - I'm going to go with "old and wise". At the same time I am on my quest for the old classics.Of course Days of Wonder has to go and announce a new game that pulls on every heartstring! I am talking about the newly announced Corinth that is to be released in March.Let's break it down;
▶️ It's Days of Wonder which means stellar components and artwork.
▶️ It's a roll-and-write which is something we both really enjoy.
▶️ It's by Sébastien Pauchon (Yspahan, Metropolys, Jaipur) who's games we really like.
▶️ It looks like it uses a dice mechanisms similar to that of Yspahan - which is awesome.
▶️ It's playable for two and takes 20:ish minutes to play. I c…
Read more

Hi there, everyone! I thought it would be time to introduce myself. I'm Linda, the gaming wife who will also be contributing to this blog. I have no grand plan for this blog, but I will try to write regularly. On the Internet and social media I'm mostly known as rinuda or rinuda86, and on BGG I have the username Blue_rose.

So who am I? What sort of gamer am I? I'm a Finnish lady (although let me point out my native language is Finland Swedish). I'm married to my wonderful husband Jens and I'm the mother to an awesome little boy. I work in education as a teacher's assistant in kindergarten. Other than gaming I love reading, nature and good food. I have also been very interested in languages since a young age and I would love to learn more languages if I only had the time.

I have been playing board games actively for some 12 years now. I met my husband in January 2007, and he introduced me to the wonderful world of modern board games. And I was hooked immediately!…
Read more